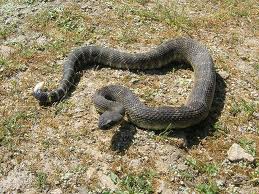 This info was sent along by Nancy and John H. and was in response to an inquiry a neighbor had sent.

[I was asked by J.] to email you, because she said you had some concerns about rattlesnakes on your property.  I’d be happy to talk with you at any time about any rattlesnake concerns you may have, and also, if I can’t answer your questions, Dan Beck, the herpetologist at CWU, specializes in rattlesnake research, and would be another great resource for you. In the meantime, maybe I can allay a few of your concerns with this email.

J. said you were primarily concerned with the possibility of your dad being bitten while changing sprinklers, and with the possibility of having a den on or near your property.
We have only one species of rattlesnake in our area — the Northern Pacific rattlesnake. The species is primarily known for its mild temperament, and rarely bites humans. Its venom is not a neurotoxin and doesn’t cause fatalities. Also, adult rattlesnakes have good control over the release of their venom, and they prefer not to waste it on things that are too big to eat, so over 50% of defensive bites by rattlesnakes involve no venom at all,  and a third of the bites that involve venom involve so little as to cause no damage.  Of course, you should still see a doctor if you’re bitten!  If you have a lot of rattlesnakes on your property, it’s a good idea to talk to a veterinarian about having your pets vaccinated in the spring.
Dan Beck likes to put the danger from rattlesnakes in perspective by comparing rattlesnakes to stairs. Last season I believe there were 3 people in our area bitten by rattlesnakes, and none of the three was badly injured.  If you compare those numbers to the number of people injured or even killed as a result of falling on stairs in the same time period, you would have to wonder why people worry about rattlesnakes, instead of campaigning for an end to staircases!

While many people don’t realize it, Washington State wildlife regulations prohibit the killing of rattlesnakes. The one exception is that individuals possessing a valid hunting license are permitted to kill two rattlesnakes in a season. Anyone killing one outside of that provision can be fined.
As far as your dad’s situation.  He’s not likely to be bitten while changing sprinklers.  Have him take some basic, common sense precautions, such as wearing long trousers and shoes in brushy areas, and not reaching into small spaces without looking, and wearing gloves when weeding or reaching into a wood or brushpile. Also, snakes like to crawl along the sides of buildings, because having the wall on one side makes them feel safer, so it’s a good idea to look before stepping over a threshhold to go outdoors. He might encounter a snake, but he’s really not likely to be bitten by one.
I ‘d be happy to visit with you or with him by phone or in person.  Just knowing a little about rattlesnake behavior would probably make you and your dad much more comfortable.  A lot of the fear factor comes from misinterpretation of their behavior.  For example, many people think coiling and rattling are threat behaviors, and that a rattlesnake who coils and “stands his ground” is exhibiting aggression. It couldn’t be farther from the truth. A rattlesnake rattles when he’s frightened, and coils because when he’s stretched out,  he’s virtually defenseless. His whole body is exposed, and it’s diffcult for him to get his head around quickly to defend himself.  If you’ve crowded or startled him into coiling, he’s likely to stay coiled, because in order for him to leave, he would have to stretch out and turn his back to you.  So he’s going to wait for you to leave before he dares to stretch out again. The best way to make him move is to walk away for a few minutes. When he’s sure you’re gone, he’ll uncoil and go on his way.
The safe way to move a rattlesnake:   I have to move rattlesnakes all the time, to get them off roads, so they won’t be run over.  There’s no need to put yourself and the snake in a position where a problem can occur.  All you need to do is let the snake see you from a distance where he doesn’t feel threatened enough to coil (a yard or two), and then move back toward his tail.  This will make him nervous and he’ll move forward to avoid you.  Just by walking slowly beside his tail, you can walk him right off the road like a puppy on a leash.  What you don’t want to do is crowd him so closely that he coils, or crowd him from the front, which will make him turn around. He knows where he’s going, so you want to move him in the direction he was traveling when you found him, or he’ll wait for you to leave and then turn around and end up right back in the road ten minutes later. 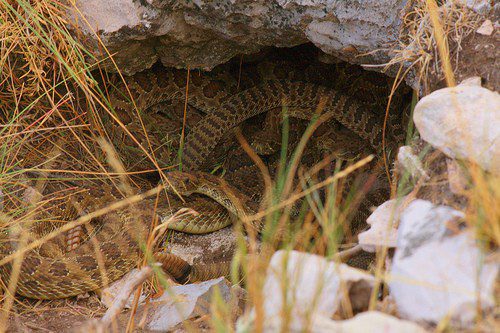 Is there a den in the vicinity?  If you have rattlesnakes on your property, there is definitely a den in the area. Rattlesnakes can’t survive the winter without hibernating.  The hibernaculum, or den, is communal and the location is passed down from one generation to the next, with all of the snakes in the area returning to the same den every winter. This is why it’s important not to try to relocate a rattlesnake. Relocating a snake almost always results in the snake’s death, because he may not be able to find the den in the new area. Relocated snakes will often wander aimlessly, rather than eating, in an attempt to find their way back to familiar territory and if they don’t starve to death in the process they will usually freeze to death when winter arrives. You’d have a hard time locating a den in the summer, though. During the summer the snakes are dispersed throughout the area, and the den site wouldn’t look much different to any other part of the hillside.
I’m generally hesitant to help anyone locate a den site, or to take anyone to a den site I know about, because the snakes are so vulnerable there.  Rattlesnake numbers are declining all over the country, with predation by humans being the number one cause.  Enormous damage can be done by a couple of unscrupulous people attacking the population at the den. This, in fact, happened recently — a herpetologist friend of mine went to check a local den site and found a group of people dragging the snakes out, throwing them on the road and running over them with trucks.  He stopped them, but by then it was too late for most of the snakes, and the population has never recovered.  So, I remain very concerned about what might happen at a den site, if someone tells the wrong person about it.
I hope this gives you something to work with.  Please feel free to contact me at any time with any concerns or questions you may have about rattlesnakes.
Regards —
Wendy Shaw
—
“You can’t put a rope around the neck of an idea.” — Vol. Bobby Sands

In other news, several club rides have been held in the last week or so, since the Fair, but I’m back to school now, so I couldn’t go[ >:( ] and no one sent me pictures, so you’ll have to imagine the purty scenery.

A bunch of  KVTRiders will be heading up to Wenatchee this coming weekend for the Appleatchee Riders‘ “Dry Gulch Trail Challenge.”

Also coming up is the Washington State Horse Park’s “Fun Ride” on the 24th.  (Click on the link above to go to the website–info on the Fun Ride is on the right side.)

4 thoughts on “SNAKE! (and other updates)”